The 9-5 is dead but the office is NOT

By JAMES ROBINSON FOR MAILONLINE

Coronavirus had killed the traditional 9 to 5, but the office will remain a key part of British working life, a new report has today claimed.

The publication warns workplaces 'will not return to normal' after the pandemic is brought under control - with employees having adapted to the 'new normal' of working from home during the Covid-19 lockdown.

But it describes speculation that the office is dead as 'misplaced'.

Instead, the office will still play a key role for white collar workers, many of whom actively want to return, the report adds.

This is driven partly by an increase in stress levels while working from home, as well as the a lack of personal development and loneliness, according to the report.

It suggests workers splitting time between the office and working from home may be the way forward for many companies, even after the pandemic is over.

The publication, released today, was commissioned for the British Contract Furnishing Association (BCFA), a business membership organisation representing firms within the furnishing industry.

Commenting on the findings, Jeremy Smith, managing director of the BCFA, said: 'The voice of officer workers and their employers has now been heard loud and clear – this report puts beyond doubt that the way people work is going to change.

His report puts beyond doubt that the way people work is going to change. 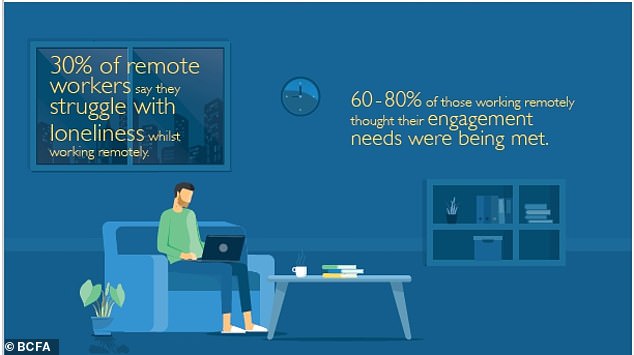 The desire to return to the office is driven partly by an increase in stress levels while working from home, as well as the a lack of personal development and loneliness, with 30 per cent of remote workers struggling with loneliness while working remotely, the report says 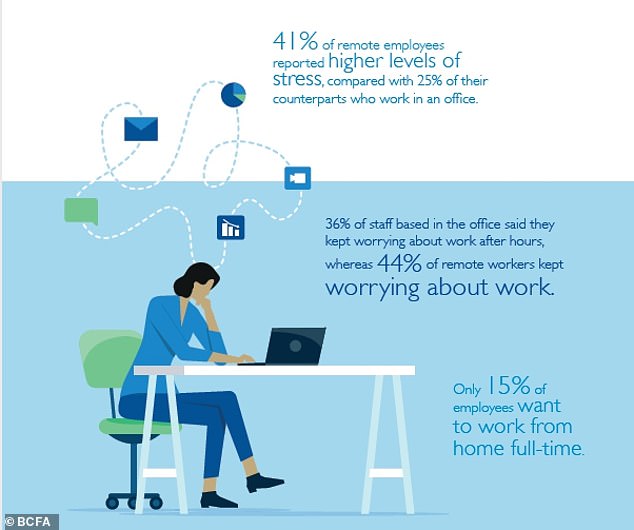 Stress levels have gone up while people have been working from home according to the report, with many worrying about what managers think of their productivity while away from the office 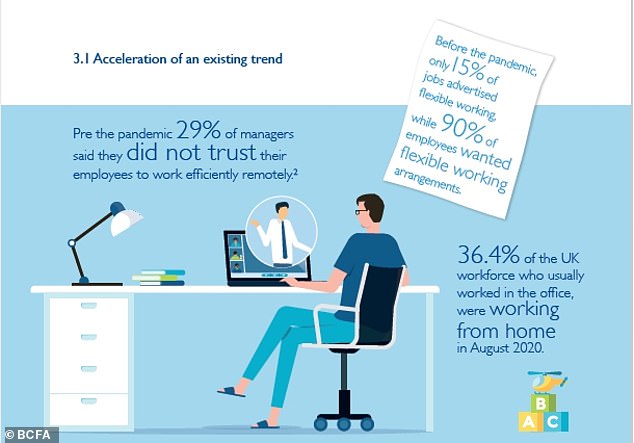 'Home and remote working has lost its, often negative, reputation however, it is also clear that teams need space to grow, flourish and collaborate together, and the office of the future will need to support this if organisations are to be successful.

'The seismic change that has happened over the last several months is here to stay – the future will be a mix of people working from home and working and collaborating at the office.

'This will have major implications across the country and we are urging government at all levels to take this into account as they make policy decisions for the future.'

The report, which collates information and surveys from dozens of publicly available studies, quotes one source which says 41 per cent of remote employees reported higher levels of stress compared with 25 per cent of their counterparts who are in the office.

Commenting on the findings, Jeremy Smith, managing director of the BCFA, said: 'The voice of officer workers and their employers has now been heard loud and clear – this report puts beyond doubt that the way people work is going to change.'

It says work-from-home employees worry about seeming unproductive - with one study finding that 46 per cent of employees felt under pressure to demonstrate they are truly working from home – including making sure they are ‘more responsive’ on email.

Another study, the report highlights, by NordVPN, claimed that UK employees have been adding around two hours to each workday while working from home - meaning an extra working week per month.

The report says that the fears over productivity among workers comes despite other studies, highlighted in the publication, which show many businesses have seen an increase in productivity with staff working from home.

This includes a recent study by the International Workplace Group (IWG), which claimed 85 per cent of businesses had confirmed productivity increased as a result of having greater flexibility, with 63 per cent reporting a minimum 21 per cent improvement in productivity.

But the report also raises other issues with working from home.

It claims some workers, particularly younger employees who are less likely to have access to office space, have been working on kitchen tables, sofas and 'other unsuitable areas' while in lockdown.

Meanwhile, workers have reported internet and hardware issues, with 35 per cent saying have they have had issues with video conferencing software, such as Zoom, while 38 per cent have experienced problems with their firm's Virtual Private Network (VPN) - which are used as a security measure. 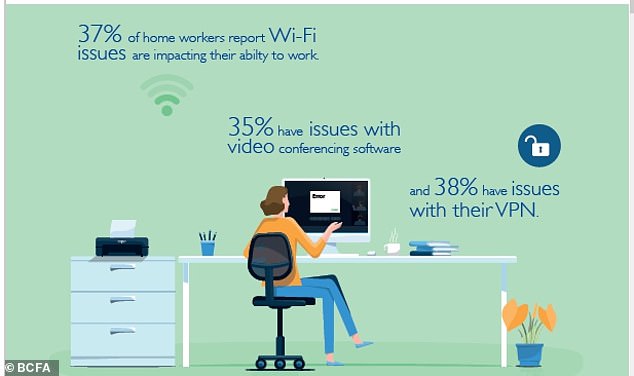 The report says workers have reported internet and hardware issues, with 35 per cent saying have they have had issues with video conferencing software, such as Zoom, while 38 per cent have experienced problems with their firm's Virtual Private Network (VPN) - which are used as a security measure 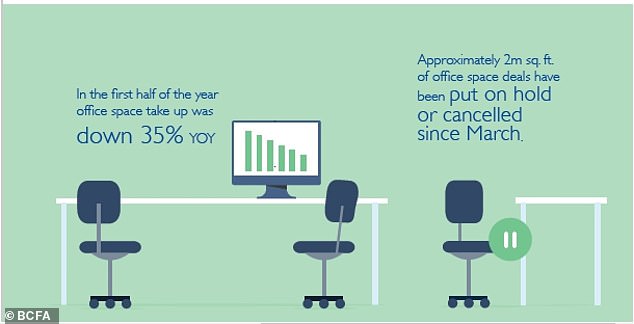 Office space take up is also down 35 per cent year or year according to the report, which office space deals put on hold or cancelled since March

Other issues raised in the report include loneliness - citing a study published by FinderUK which found that 30 per cent of remote workers say they struggle with loneliness when working remotely.

A lack of personal development, employees not having face-to-face contact with colleagues and managers and not feeling appreciated for their work were also raised in the report as downsides to working from home.

But will raising the issues some employees have faced while out of the office, the report says working from home has provided a benefit to some employees.

The publication says many workers have improved their work life balance, while others have managed to cut out long journeys to and from work, which it said was 'reducing work and commute related stress, helping work-life balance and having a positive impact on the quality of life overall.'

Commenting on the study, Dr Craig Knight, a leading psychologist who has advised companies on creating work spaces, added: 'There are obvious pros and cons for both employees and their bosses.

'While people have adjusted to working from home well, significant numbers report struggling with loneliness and feeling under pressure to show constantly they really are working.'

He added: 'Engaged employees are generally those that have choice and control over when and how they work.

'The office is, and will remain, one of the key spaces for work. At the same time employers will need to consider the home as an extension of the work environment bringing new challenges for employers.'

The report adds that one of the major factors behind the way forward will be the businesses themselves.

It says London-based outsourcing giant Capita have not renewed leases on 25 of their offices, while Lloyds Banking Group was reviewing its office space requirements after deciding most of its 65,000 employees have performed well working from home.

But the report says others, including social media giant Facebook, had turned against working from home models, while American mutlinational IBM had also pulled back from its staff working from home.

However the report concludes that the likely way forward for businesses will be a mixed model, with employees working from home some of the time, and in the office others.

t says: 'Despite speculation that the office is dead, and businesses will move to full time remote working, the office still has an integral role to play.

'It is clear that the world of work has changed. In some cases, entire industries may never recover whilst others are growing rapidly.

'The same will be true of the way we work. Undoubtedly, for many, the pre pandemic 9-5 in the office will be a thing of the past.

'However, for a wide range of reasons from wellbeing, through productivity to risk and control, the office will remain a key element of our work experience.'

The report adds: 'A blended working approach, mixing the office with remote working and redesigning office and home working spaces, will be required to support the future of work.

'Businesses need to carefully consider the issues identified in this report before taking decisions on the future of their office space, and on the way their employees work in the times ahead.'

The BCFA commissioned independent consultants Where Now Consulting to produce the report.

Mark Spragg, managing director of Where Now Consulting, said: 'There has been much speculation over recent weeks with many venturing an opinion about what the future will look like.

'We are now starting to see decisions being made that will have long term impact on the companies that take the decisions and wider society.

'There is no "one size fits all" and leaders will need to really think through the role the office of the future will have in the success of their organization and the balance with home and remote working.'